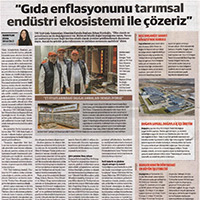 TFI TAB Food Investments Chairman Erhan Kurdoğlu says, “In Turkey, we have got neither oil nor natural gas reserves.  Our biggest natural resource is agriculture. We have got to reshape the agricultural industry with a full focus on production, not on trade. Only in this way can we overcome the food inflation and employment problems”.

“The food prices will increase by two-folds in the next decade.  Cultivated areas are restricted in the world; we have 280 decares of cultivated land in Turkey.  However, we can utilize only 35 percent of this area.  This means that about USD 180 billion lies buried under the soil.  We have got neither oil nor natural gas reserves in Turkey.  Our biggest natural resource is agriculture; Turkey has got an agricultural potential worth USD 250 billion.

We have got to reshape the agricultural industry with a full focus on production, not on trade.   Only in this way can we have a word in international arena and overcome our food inflation and employment problems at the same time. We have to establish agro-industry ecosystem in Turkey in order to have a say in the future.” These words belong to TFI TAB Food Investments Chairman Erhan Kurdoğlu.

Kurdoğlu maintains that the food inflation in Turkey can be overcome by shaping the agricultural industry with a full focus on production rather than on trade.
As a subsidiary of Ata Group of Companies in food industry, TFI TAB Food Investments currently has operations in 5 countries from 4 continents, and shapes its investments accordingly.

“People may see us as a fast-food restaurant operator, but there is a huge ecosystem behind this image whereby we produce our own bread, potatoes, salad, milk and meat,” says Kurdoğlu, adding that they pioneer in establishing agricultural industry ecosystem with their investments.

The target of TFI TAB Food Investments is to become a global operator brand that opens to the whole world from Turkey with the help of its plants and production premises for meat, potatoes, salad, milk and bread which it established with an investment of USD 170 million.

With more than 2000 restaurants and 50,000 employees, the Group conducts its operations in three domains which are Turkey, China and ecosystem companies.  The main driving force behind the company is the ecosystem consisted of factories and production premises, purchasing, warehousing and logistical services all of which are located in Turkey .

Ekur Et Integrated Processing Plant which the Group founded in Amasya with an investment of USD 80 million following the potatoes and bread plants is one of the Group’s most important investments in industrial agriculture. Founded on a total of 92,000 square meters, 40,000 square meters of which is covered, the plant is one of the largest integrated meat production plants in Turkey with its capacity to slaughter 120,000 cattle and processing 36,000 tons of carcass meat.   In addition to satisfying the red meat needs of the Group-owned Burger King, Arby’s, Sbarro, Usta Dönerci and Döner Stop restaurants, the plant also offers the producers meat and delicatessen products with agreeable products at its shops named ‘Amasya Meat Products’ with its motto ‘all deserve quality meat’.   The Group owns 100 restaurants and employ 30,000 people in China, which country produces the biggest part of its overall turnover.  The Group is preparing to launch soon USD 2 million worth of exports per annum to Qatar, and including Africa to its export destinations is among the Group’s future plans.

During our visit to Ekur Et Integrated Plant in Amasya, Erhan Kurdoğlu told us the Group’s activities on the area of industrial agriculture in general and gave us the following information on the production of potatoes and bread:  Our bread plant named ‘Ekmek Unlu Mamulleri’ is one of the largest factories in Turkey with a monthly 25 million rolls and 1 million slice breads. Atakey, in which we are equal partners with Özgörkey Group, is a leading ready-to-fry potato producer of the world with 90 tons of production per year. We run contract farming activities with local farmers. We provide our farmers the seeds of the white potato which is good for frying but is not grown in Turkey, and we buy their products along with our purchasing guarantee.   We use these potatoes in our restaurants in Turkey and we also export them to China for use in our restaurants there.

“We owe our leadership to domestic sourcing and solution-oriented fully integrated work model,” says TAB Gıda CEO Caner Dikici, adding that the TFI TAB Food investments included more than the bread, potato, salad, milk, meat plants and production facilities.  All solutions from the production and installation of the kitchen equipment to the advertising services, and from digital delivery platform to the purchasing, warehousing and logistic services are being conducted under the roof of TFI TAB Food Investments.

About half the soil of Amasya province is cultivated area, and the province is regarded as an ideal place for stockbreeding owing both to its flora and its nature.  It is among the best regions of Turkey for stock farming.  Dairy farming or dairy/meat farming may be preferred in some regions, but meat farming is the main choice in this region.   The number of the livestock which stands at 200,000 at the moment continues to rise regularly.  There are about one million livestock at the 200 km long axis of Samsun, Kırşehir, Yozgat, Kars and Erzurum.  Ekur Et Integrated Plant is founded at the Besi  Organized Industrial Zone in Suluova.  There are only 5 to 6 livestock zones in the entire Turkey, and the government supports investments to these zones via subsidies.

Production Inside and Respectful for Nature

Production activity at Ekur Et Integrated Plant, which is located inside the nature, is respectful for the nature.  The plant is equipped with a system that gives way to water and energy efficiency.  All types of waste from the plant are utilized in some way.  The plant has state-of-the-art rendering system designed as two separate lines.

Strong smells and gases are removed through “oxidizer” system.  Packaging waste is delivered to the license companies for recycling.  All waste water is treated via biological treatment system before being discharged to the nature.   The power of the plant is used economically and efficiently thanks to the “Trigeneration” system which allows the simultaneous use of the power in three different modes as lighting, heating and cooling.

Having opened 310 new restaurant - 122 in Turkey and 188 in China - last year, TFI TAB Gıda invested more than TL 500 million and closed 2018 with 40 percent growth.   Of the Group’s total turnover of TL 7.3 billion; TL 2.5 billion came from operations in Turkey, TL 3.1 billion from operations in China, and TL 1.7 billion from franchise operations in Turkey and China.  The Group offered about 7,000 new jobs last year raising the total number of people employed at the Group to 50,000, whose about 20,000 are in Turkey.  The Group is the biggest franchiser of Burger King in the world, and it is getting prepared to assume Popeyes operations in China after Burger King.