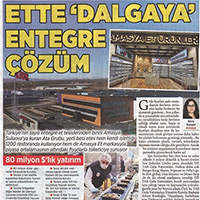 Food prices are number one item in the agenda of all from the man in the street to the top of the government... Although the import option which the government put into effect to tame the recent fluctuations in domestic commodity prices seems to have worked in some commodities including mainly the meat, common viewpoint of the public is that a more lasting and stable solution is needed... This lasting and stable solution is a planned, productive and technology-based production. But it is so rare to see any such implementation in the real life!  One of these rare implementations belongs to TFI TAB Food Investments, a subsidiary of Ata Group Companies that has an annual business volume of USD 2 billion in eight countries from four continents.  TFI TAB Food Investments, which represents four widely-known global brands - Burger King, Sbarro, Popeyes and Arby’s - and owns two popular domestic brands - Usta Dönerci and Döner Stop - reaches new dimensions in its quest for agricultural and stockbreeding solutions.   TAB Food Investments Chairman Erhan Kurdoğlu describes this new territory as “Our dream and our target is to introduce healthy, quality and delicious meat with a reasonable price”.

Retail stores coming
This dream and target of Kurdoğlu is based on Ekur Et, which was established at Suluova, Amasya, with an investment of TL 80 million. The livestock grown at the breeding farm can be found as delicatessen or packaged products at Ekur Et, which is one of Turkey’s top three integrated meat processing plants in terms of production capacity thanks to the state-of-the-art production methods employed in its construction.  The Group has now started offering also to the retail consumers the products of this plant which was originally founded to meet the needs of its more than 1200 restaurants in Turkey. These products having the brand of Amasya Et are now offered to the consumers at various supermarkets and at ‘Amasya Et’ stores.  Amasya Et offers consumers domestic livestock with reasonable prices, because they partly produce their own feed, and they can transform even the animal waste into energy.

Before the meat investment, TAB Gıda had previously invested also in potato, bread, dairy and salad.   The Company has potato production on contract basis.  It gives farmers the seeds.  The farmers race with their peers in Europe with a production of 5,000 tons per decare.  TAB Gıda grew its potato production to such an extent that it started exporting to China where it also acts as Burger King’s franchiser having more than 1000 restaurants.

Kurdoğlu said that, “We derive our foremost strength from the agricultural industry focused ecosystem where we have invested USD 170 million. In 2018, we opened 310 new restaurants in total - 122 in Turkey and 188 in China - we created 7,000 jobs, we invested T 500 million and we grew by 40 percent with a total turnover of TL 7.3 billion”.

Having established one of Turkey’s largest integrated meat plants at Suluova, Amasya, Ata Group uses the domestic livestock produced in this plant at its 1200 restaurants while it also offers these products to the consumers with below the market prices.

Established with an investment of $80 million

TAB Gıda CEO Caner Dikici said that TAB Gıda is the market leader at present and continues as follows:
“We owe this success to domestic sourcing and solution-oriented fully integrated work model.  With TAB Academy, we provide a solution to the human resource needs, which is a primary issue in our industry.  It is thanks to this integrated work model that we offer a turnkey and profitable work opportunity to our franchise investors whereby they can be a part of a quality, advantageous, and ready system.”

180 billion dollars remain under the ground

Kurdoğlu thinks that the progress they have made should set up a model for the country in general and emphasizes the importance of production planning: “Prices of food products will double over the next 10 years.

Agricultural land is limited in the world, whereas in our country we have 280 million decares of agricultural land. However we use only 35 percent of it. About 180 billion dollars lie under the ground. We have to reshape the agricultural industry by focusing on production instead of trade. We can overcome the problems of inflation and unemployment only through such an approach.”

Erhan Cansu , Ekur Et Integrated Plant CEO and a member of TFI TAB Food Investments Board of Directors said they have been investing in rearing of domestic livestock:

“There are serious fluctuations in meat prices. In order to stabilize the prices, we are growing our own livestock. Although purchasing animals from outside sources is not our priority, our presence here eases local farmers’ worries about selling their livestock. We also open our slaughterhouse which has a slaughter capacity of 8,000-10,000 heads of livestock per month to local farmers. We supply good quality meat to the public directly from the producer. Our meat prices are very affordable because there is no intermediary in between.”