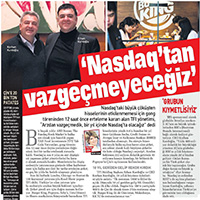 A TFI team which was on roadshow with 150 institutional investors in London, Chicago and Boston for the last two weeks had great expectations from the initial public offering (IPO) due to the keen investment appetite for Turkey. The company is now watching for the most proper time for the IPO. Last year, Goldman Sachs, Credit Suisse, and European Bank for Reconstruction and Development (EBRD) had bought 8.6 percent of the shares of TFI, which holds in its portfolio the brands Burger King, Popeyes, Arby’s, Usta Dönerci and Sbarro. The company decided to go public together with its shareholders, and it chose Nasdaq Stock Market of the United States as the listing venue since Nasdaq is predominantly favored by high-growth companies.

TFI’s turnover grew by 40 percent and its profitability by 60 percent in 2017, while the company’s consolidated sales reached TL 6 billion together with its franchises in the same year. The company which employs 50,000 people together with its Chinese operation expects a similar increase in its performance this year. Erhan Kurdoğlu said they produced 50 percent of their milk, bread, potatoes, meat and green vegetable supplies, and added that, "Our meat processing facility in Amasya processes 18,000 tons of meat per annum. We send 20,000 tons of potatoes to China each year. At our milk processing facilty in Acıpayam, we provide 50,000 tons of raw milk to the market each year".

TFI performs its global operations under Restaurant Brands International (RBI), one of the biggest subsidiaries of Brazil-based 3G Capital. CEO Korhan Kurdoğlu said, “We provide 20 percent of the annual growth of RBI, the apple of eye for 3G which manages USD 400 billion in aggregate per annum. We will lead them to the public offering as a Turkish company. We are the largest business partner that adds value to the Group”. Kurdoğlu said they were planning to list also in Istanbul Stock Exchange (BIST) after the Nasdaq, adding that the foreign investors had full confidence in Turkey.