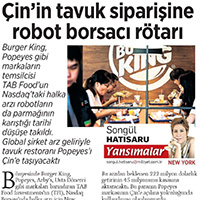 We are in New York for the initial public offering at Nasdaq Exchange, of the TAB Food Investments (TFI), which holds  the brands Burger King, Popeyes, Arby’s, and Usta Dönerci.

New York Stock Exchange and Nasdaq Stock Market posted the biggest ever daily loss on Monday when TFI concluded the final discussions on its IPO with the investors in London. Global markets collapsed and there was turmoil everywhere. Interest rates in the US bond market rose sharply after it was announced that the pay rises were more than expected. This sharp increase in interest rates led to a great sell-off in the stock markets. It was maintained that the steep fall in the US stock markets in New York was driven further by the triggering of the algorithmic trading, also called ‘robot trading’. The plunge in the US stocks shook also the global markets. Naturally, TFI declined to consummate its IPO in such a setting. Kurdoğlu Brothers, TFI executive team, consultant banks decided to “gear down”. The company’s management which consequently postponed the public offering to a further date is now planning to realize this target within a matter of one year at the most. A TFI team of 4 people which was on roadshow with 150 institutional investors in London, Chicago and Boston for the last two weeks had great expectations from the initial public offering (IPO) due to both the spectacular growth pace of the company and the keen investment appetite for Turkey.  The company is now watching for the most proper time for the IPO.

Last year, Goldman Sachs, Credit Suisse, and European Bank for Reconstruction and Development (EBRD) had bought 8.6 percent of the shares of TFI, which holds in its portfolio the brands Burger King, Popeyes, Arby’s, Usta Dönerci and Sbarro. The company decided to go public together with its financial partners after this purchase, and in line with the guidance of its shareholders, it chose Nasdaq Stock Market of the United States as the listing venue since Nasdaq is predominantly favored by high-growth companies.

We met in New York with TFI Holding Chairman Erhan Kurdoğlu and CEO Korhan Kurdoğlu, who decided to postpone their IPO plans to a more appropriate time. Kurdoğlu brothers told about their growth story  in the last 24 years and their targets for the future and shared with us how they decided to enter the hamburger business while they were in Miami for studying civil engineering. Korhan Kurdoğlu said foreign investors had full confidence in Turkey.