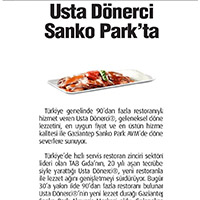 Created by TAB Gıda, the fast food restaurant chain sector leader in Turkey, with its more than 20 years of experience, Usta Dönerci® continues to expand its taste network with new restaurants. The new taste stop for Usta Dönerci®, which has more than 90 restaurants in approximately 30 cities, has been Gaziantep Sanko Park Shopping Mall. Thus, the number of restaurants of Usta Dönerci®, offering the traditional doner kebab taste with fast service and high quality understanding, in Gaziantep has increased to three.

Usta Dönerci® receives a great admiration since the very first day of its foundation, and in addition to its delicious meat and chicken doner kebab, it stands out with its rich menus consisted of desserts and salads, soup and beverage varieties suitable to everyone.

"It was founded with hundred percent domestic capital"
TAB Gıda Franchising Manager İlhan Erkan said, “As TAB Gıda, we have transferred our experience in Turkey and the world to Usta Dönerci® in 2013 and we created a strong brand with hundred percent domestic capital. We continue with our growth throughout the country in line with the strong franchise system we established and with our investments. Today, the number of Usta Dönerci® restaurants is more than 90 in over 30 cities. We are working with suppliers producing with international standards, and we are developing tastes suitable to the Turkish palatal delight. Achieving a success in the national market within a short period of time, we have no doubt that Usta Dönerci® will become a world brand. With its high quality and taste standards, Usta Dönerci® aims offering doner kebab fast with the most affordable price, and we believe it will leave a mark in the doner kebab sector in 2017."

About TAB Gıda:
About TAB Gıda: TAB Gıda Sanayi ve Ticaret A.Ş., a member of ATA Group, is the exclusive licensee of Burger King®, Sbarro®, Popeyes® and Arby’s® trademarks in Turkey, and is the operator and development partner of Burger King®, Sbarro®, Popeyes® and Arby’s® restaurants in Turkey. Burger King® has started with its operations in 1995, while Popeyes® and Sbarro® have started with their operations in 2007 under TAB Gıda. TAB Gıda has acquired Arby's® in 2010, and has established its own trademark Usta Dönerci® in 2013. Today, TAB Gıda has more than 600 Burger King® restaurants, around 80 Sbarro®, more than 180 Popeyes®, around 50 Arby’s® and more than 90 Usta Dönerci® restaurants throughout Turkey. Featuring fast food restaurant chains, TAB Gıda Sanayi ve Tic. A.Ş. is the leader of its sector with several awards to date.